Mike Pearson with Russell Drenth at the Commodity Classic 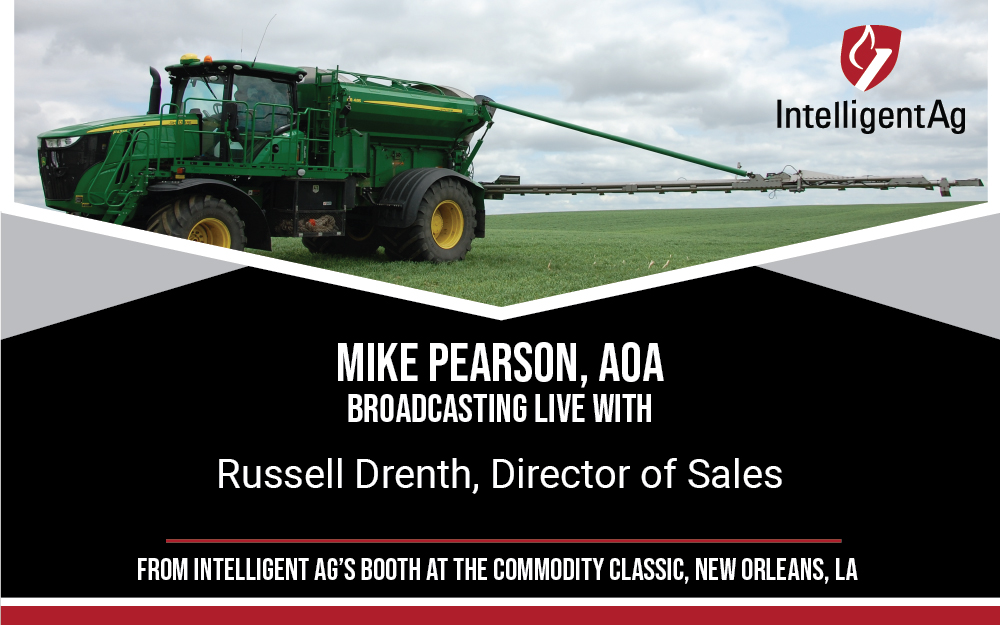 Russell Drenth: We originally started in Fargo, ND over 12 years ago. One of the patriarchs today is Berry Batcheller. Kind of an interesting gentleman, spent most of his life in agriculture, went on to get a aerospace engineering degree. And long story short, it took a lot of aerospace, engineering and technology and applied it to agriculture, things that had never been done before.

We identified first and foremost a lot of problems with blockage technology, especially with air seeders, and we’ll talk about that a little bit later. But that was actually his first innovation. Rather than having an optical sensor out in the field, which causes a lot of issues and problems, he actually developed an acoustic sensor just a very different way of looking at a problem.

Mike: Using sound waves rather than visual indications as to whether or not things are flowing? Very cool. Intelligent Ag  for 12 years, you guys have been developing that technology and then here today you have been highlighting a couple of core technologies that really matter. Now let’s talk floaters first, if we can Russ, what is it that you’ve got here Commodity Classic that really matters for that floater applicator today?

Russ: Well, you know it’s interesting because floaters, we have made some progress obviously with mapping and GPS and things of this nature. But would you believe at the end of the day, you really don’t know for most floaters right now, you don’t know what’s actually coming out of the back end of that machine? And that and that’s remarkable to me to think that somebody driving that machine and coming out of those tubes in the funnel and whatever and you have no idea what’s actually being spread.

Mike: That is an unbelievable thing. But here we are in 2022. We’re connected to everything, right? Yet we don’t know what’s happening 35 feet behind us.

Russ: Yeah, I mean, we noticed this and it was a complaint with many people because you’d have stripes up and down the field. One of the tubes was plugged or something of this nature. And so we actually applied that acoustic technology. That was in WBM and now has been around for over 10 years and patented. We applied that to the deflectors on the back of the floaters and have that same technology, you can have an iPad in the cab. In real time you know, everything is spreading.

Mike: That’s pretty cool. So I’m fascinated by this technology. Hearing the fertilizer hitting the defector plate, talk a little bit about how that works. What sort of construction changes are needed to be made to the floater to get this out there?

Russ: That’s the beautiful thing, it’s actually a very easy install. The acoustic center presses right onto the deflector and then, it is just like a doctor’s stethoscope. You have a tube that goes to an ECU and it has microphones in there, which are the brains. It tells the iPad what is going on so you know in real time what is happening. A kinda interesting story is about partial blockages.

Think about it. Maybe you do a visual test and everything looks fine and it’s 70%. 30% blockage would be very hard to see with the eye. We actually had a chunk of wood show up in one of the funnels. And what had happened is, I suppose, out of a pallet or something, it got in the mix and we got a phone call from the operator saying “Hey, you know, something’s wrong with your system.” We said “I don’t think so because it’s saying this isn’t right.”

Mike: You were seeing the system flash saying, hey, something’s wrong? Right. And then they were looking out the back and going well, I’ve got products right wing so clearly your system has the problem. And it was not the case.

Russ: The system did exactly what it was supposed to. They went in and did some research and tore the thing apart. Sure enough, there’s a chunk of wood. They fixed it and moved on. But here’s the interesting thing. If they hadn’t found that, look at what would have happened to the farmer. The farmer would have been forever guessing. Now did I do something with my sprayer? Did I do something at planting? How did this streak happen in my field?

Mike: I think the ability to grasp the farmers’ impacts it has is intuitive. I understand that of course he’s gonna be frustrated. You’ve paid for this fertilizer. It’s not where it should have been. But this also, I imagine, has ramifications for the co-ops. Or the applicator company who makes a second trip to fix it somehow?

Russ: Absolutely. I can tell you that. insurance claims, they exist all the time. If you talk to co-ops of retailers, they’ll say, we may have even as high as 3% insurance claims depending on the year. If there’s really a lot of moisture in the air, fertilizer bridging. Things of this nature. There’s just a lot of other other hidden expenses with the insurance claims. And the reputation.

Mike: Right, no one wants to be the company that can’t get product exactly where it needs to be. Elevators, co-ops, and commercial applicators are now adopting this technology, why? Gains in efficiency, or are you getting labor gains? Where does it really matter to their bottom line? Right?

Russ: So I can tell you about the Recon SpreadSense®  that just that operator not having to constantly look in his rearview mirror or or have people standing and watching and just all the little intricacies. I have most operators tell me at the end of the day, I’m 30% less fatigued just because I know what I’m getting. I don’t have to run around and check all the time and the efficiency gains probably easily 15%. It’s just a ballpark.

Mike: You know, thinking about the challenges every company is having with whom I have spoken to here at Commodity Classic, they are all  having an issue with labor  and keeping those employees happy. Keeping those applicators running and not jumping up and down from the cab to the ground. That’s a long jump floater, isn’t it.

Russ: Absolutely. And that leads me to our next point, which is the Engage SpreadControl®. So now not only are we monitoring as we do with the SpreadSense, but now we have spread control and basically abbreviated right now on a floater. Again looking at technology, it’ll usually be a 70 foot boom and you can control left and right. So you’re controlling 2 booms, 35 feet. That’s not very precise when you think about it. And we now actually can change that funnel box. And make it a four section control and especially on something like pie shaped feels things like this. We have significant overlap off at times 7 to 10% overlap. We could take that down to less than 2% and on square fields maybe even less than 1%, where normally they have 3% overlap or more. It’s amazing technology.

Mike: It truly is. And this is not brand new technology. You guys have been developing this for some time. How long has this been on the market now?

Russ: Plus or minus three years. It is becoming more widely adopted as people understand and know the difference. It is a win-win. Not only does the farmer get the product more specifically applied to where it’s supposed to be, think about how much time it takes for a retailer to understand. There are many intricacies of where they’re going to spread the fertilizer. And so there’s a lot of losses for the retailers if they don’t do it precisely.

We use cookies on our website to give you the most relevant experience by remembering your preferences and repeat visits. By clicking “Accept”, you consent to the use of ALL the cookies.
Opt Out.
Cookie SettingsAccept
Manage consent

This website uses cookies to improve your experience while you navigate through the website. Out of these, the cookies that are categorized as necessary are stored on your browser as they are essential for the working of basic functionalities of the website. We also use third-party cookies that help us analyze and understand how you use this website. These cookies will be stored in your browser only with your consent. You also have the option to opt-out of these cookies. But opting out of some of these cookies may affect your browsing experience.
Necessary Always Enabled
Necessary cookies are absolutely essential for the website to function properly. These cookies ensure basic functionalities and security features of the website, anonymously.
Functional
Functional cookies help to perform certain functionalities like sharing the content of the website on social media platforms, collect feedbacks, and other third-party features.
Performance
Performance cookies are used to understand and analyze the key performance indexes of the website which helps in delivering a better user experience for the visitors.
Analytics
Analytical cookies are used to understand how visitors interact with the website. These cookies help provide information on metrics the number of visitors, bounce rate, traffic source, etc.
Advertisement
Advertisement cookies are used to provide visitors with relevant ads and marketing campaigns. These cookies track visitors across websites and collect information to provide customized ads.
Others
Other uncategorized cookies are those that are being analyzed and have not been classified into a category as yet.
SAVE & ACCEPT