#BeatThisBlockage Live from the Commodity Classic 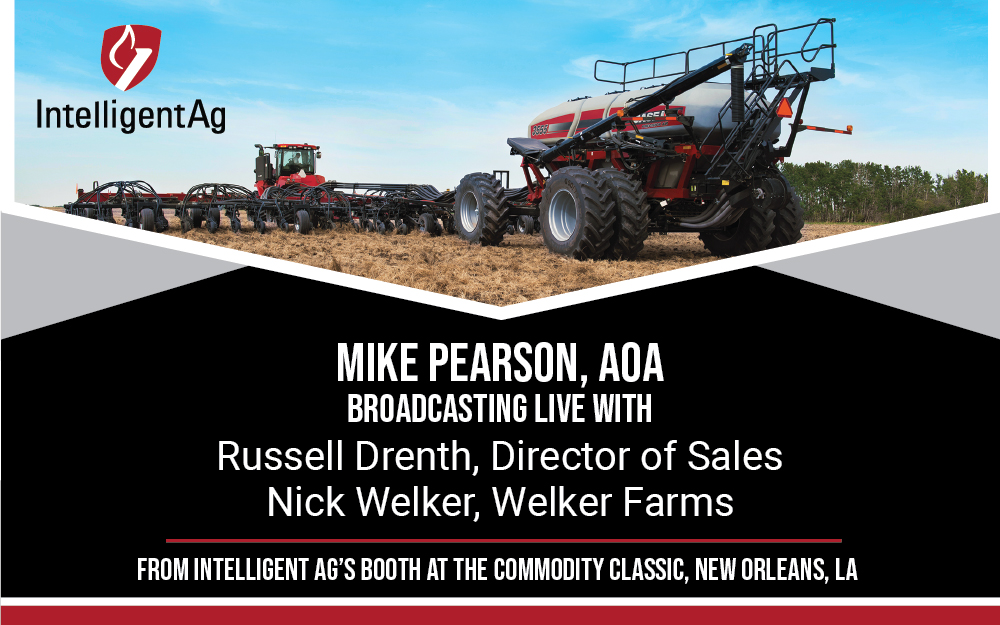 Mike Pearson: We’ve been having discussions about technology in the world of application sprayer floater application, making sure that the right product is getting to the right place as we think it should, and having that conversation. We’ve been talking to Russ Drenth, he’s the sales director with Intelligent Ag and he’s brought along Mr. Nick Welker. We have both of them sitting here today. Russ before we went to break, we mentioned the hashtag you guys are promoting to #BeatThisBlockage. Why does that resonate this year?

Russell Drenth: More than ever, we want to make sure we’re getting things in the ground. And Nick has allocated that. There are plenty of different things that can happen. Birds nests, mouse nests, you name it, in agriculture equipment. They can be there overnight and so we kind of have a fun thing and Nick, I’ll let you explain it about the #BeatThisBlockage. You get a free pair of gloves when you share your best blockage story, there’s all kinds of fun.

Nick Welker: We all have our story. As you said, anything. It doesn’t matter. Somehow mice find a way to get those tubes and we find him. Throughout social media, you can post a picture of a blockage moment that they’ve encountered. Hashtag #BeatThisBlockage and tag Intelligent Ag. That way, we can understand the headache and pain that we all know and go through. I’ve been there. It’s like a stuck moment. So if you make a post with your blockage story, Intelligent Ag will get you a free pair of gloves.

Russ: We have a lot of fun with it. You might as well make farming a little bit fun. It’s been challenging the last few years

Mike: Probably going to be challenging this year. Input costs are going higher. Farmers across the country are just struggling to get things paid for this year. Once you get them paid for you wanna make darn sure they’re going where they’re supposed to be this year.

Russ: And that is the other nice thing about the WBM. I can let Nick again explain this maybe even in better detail than I can. Especially for if you’re laying down two or three products. So you have fertilizer and seed. Our system can detect if you’re maybe fertilizer bridged or something of this nature. Maybe you’re only getting half the fertilizer on this system. Nick, I’m sure you probably have had that happen with the towers and the mass flow number. Can talk to that mass flowing up?

Nick: The mass flow number is a general number given. Doesn’t necessarily indicate an actual level or anything. It just gives you a perspective. Let’s just say one to 1000. So say 600 is the number that you put on a 70 pounds anchor seed or put on 120 pounds of fertilizer. Blend says six, 700K.

Well, you have ever seen along and everything was great and your monitors metering correctly. You look at it also it says 400. Oh, that number is down. Something is restricting the flow or we’ve had it go up higher and so it kind of gets you just thinking. You’re going okay, what could be going on here? You look on the back and you might stop and do a run and just check all the runs. It’s on the ground, but then not only that, but we found a lot of time as you said is bridging.

We’ve had a lot of bridging happen. You think things are great and you get down the field and your tank level monitor is kind of still showing a couple of bars there and it’s going down. Maybe it’s the problem. You get to the end, you open the tanks up and it’s still full of fertilizer like I didn’t put any fertilizer down. That’s where you’ll know if you’re inputting the correct program.

You’ll get into that ballpark, but the other thing too is we’ve noticed, as you’ll have, it could be that two of those eight are giving off a much lower number than the other six. And so you go, where those runs go underneath the manifold? There’s probably something stuck in the meter, like a rock or something, right up in there. It’s not letting it flow to those two runs to the thing. And sure enough, every time we go to flush it all out, clilmb inside the tank and there’s a big chunk of fertilizer jam. We would probably never look for that. We’d probably just fill it right back up again and go see it again and redo the whole farm that way.

Mike: That’s the thing that amazes me. I’m hearing you tell these stories, the ability to catch it immediately, right, and then be pointed in the right direction for troubleshooting the abilities you just mentioned. This is showing me I’ve got troubles, and I know where to look first. It Beats the pants out of having to tear everything apart randomly to try and figure out what’s going on.

Nick: The old way that we used to do it, is to do a couple of runs up and down the field. Stop. Get out. Lift the toolbar up. Press the button for a little bit. Run a bunch of products out and then literally walk and count every one of the 77. I’m looking to see if that’s the right amount.

A lot of times it can be the air pressure. We got old tractors run big buds, sometimes the hydraulics do things and the air volume drops for a second. Well, just a quick drop in airflow can plug up a run and you don’t know that, right. And so. then you take the manifold off. Look at the smearing on the meter. And you go to the other end of the drilling like they’re done plugging this in bold somewhere. There’s a tube and it’s half full of product. You’re running out the hammer and pumping everything. Listen to the sound. It doesn’t sound right.

Mike: Russ, we’re gonna be heading out pretty shortly. We’re listening to Nick till where he’s found some value. Where else are you hearing customers find value?

Russ: Oh, boy. I tell you, it’s interesting. Again, back to the SpraySense side. We had a farmer come up and say “Hey, I got stung last year. I want one of your systems as soon as possible.” I said, well, what happened? He said “Well when I switched over to soybeans, something happened. I swear I purged everything, cleaned everything out. You name it when I was sprayed at three streaks up and down my fields.” Long story short, he said, ”I think it costs me a bushel an acre on soybeans.” You get 1000 acres of soybeans, and $15 a bushel. Within one year, the system paid for itself. From a return on investment, it may be hard for some farmers to understand that and because we’re catching it proactively, it doesn’t become a problem. How do you measure the return on investment? I think Nick would suffice to say that it’s worth it. I’m assuming.

Nick: Oh yeah. I think if you add up the number of acres that you spray, I’ll put 40,000 acres of spray here, you’re gonna damage the area. And this is gonna happen.

Mike: Before we go, where can folks go for information on Intelligent Ag?

Russ: https://intelligentag.com/ Don’t forget the #BeatThisBlockage. We’ll give you a free pair of gloves if you can come up with something nifty for us.