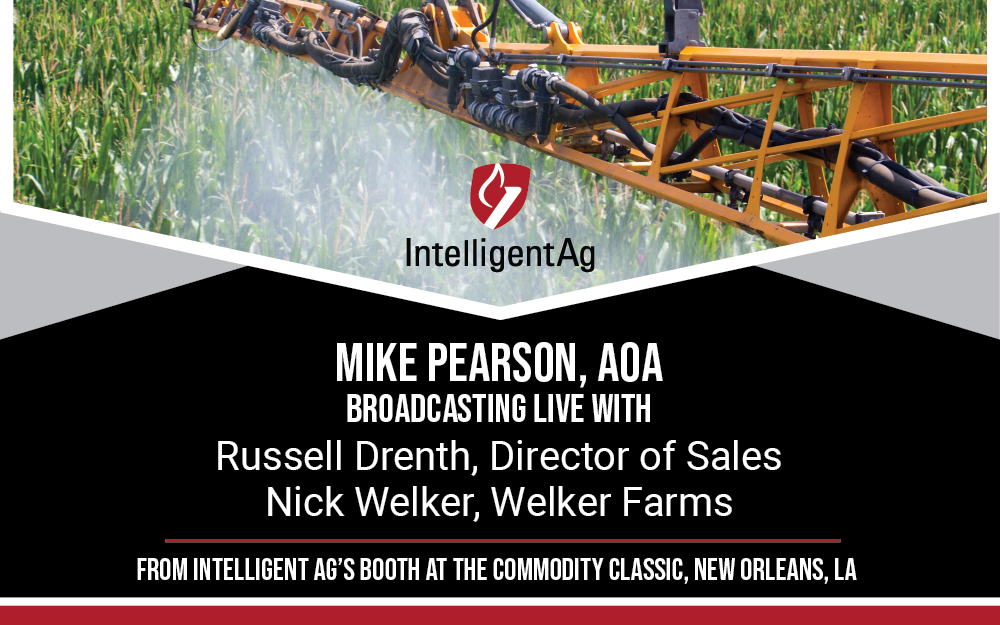 Mike Pearson: We’ve been talking to Russ Drenth. Russ joined us in the first segment and we’re picking that backup. Let’s talk about some of the exciting solutions that Intelligent Ag is bringing to the world of spraying technologies.

Russell Drenth:  Sprayers obviously have come a long way and they do all kinds of nifty things. They can crab walk, they have hydraulic booms that do all kinds of stuff. I heard they even wash your dishes now while you use it, I’m not even sure. So there’s some wonderful things. But at the end of the day, the number one thing we need to know is what’s coming out of each nozzle.

At the end of the day, unless we absolutely can control it, we need to be able to monitor the pressure flow and droplet size ’cause some of these chemicals are sensitive at each individual nozzle. You could be doing a terrible job and you never even know it as far as that goes.

Mike: That was an interesting point. Your acoustic sensors can detect droplet size. Can you measure the actual droplet size?

Russ: This is a little bit different. So this is a newer technology that we patented is really a suspended vortex. I could go through all the details, but that would probably be an hour and then maybe I wouldn’t even describe it quite right. But suffice it to say we could measure very thick liquids that are flowing a certain way to very thin clear liquids that are flowing a different way. And that’s the beauty of our technology too. How can we monitor this? That’s the birth of this type of technology.

Mike: interesting. And is it going inside the tubes? How is it working?

Russ: Yeah, it’s just in line with where your check valve normally goes. It tells you on the fly exactly what’s coming out of each individual nozzle. And unless you do that, I stress you will never have good spray quality. Just to pick on some people, first of all pick on myself. I used to do custom applications many many years ago and I can tell you I look back on it, I go back and look at the nozzles thinking I was doing a good job. Now I realize just how bad of a job I was doing even though I thought it was doing a good job. I happened to bring a little guest with me here. You may know him from his YouTube fame on Welker Farms. Nick Welker is here to tell us a little bit about some of the things that happened to you in real life out in the field that this technology could help with.

Nick Welker: Absolutely. Thank you, Russ. So yes, a couple years back, we were getting more and more into growing yellow peas. And one of the things you do with yellow peas, that’s pretty critical to the quality and their production, is pre-emergent spray.

You put the gallon in here at the right speed and you just expect that the rates are going down correctly. We did that and a couple weeks later as the emerging growth week, I noticed there were some weird streaks in the fields and some were stunted and yellow and others were green. You’re like what is going on here. It got worse and worse and before you knew it. I even took the drone up to fly around. And I’m like, what? What are we seeing here? What’s going on?

You clearly could see it was an application thing.There were areas where we sprayed and it left streaks so it must have been the nozzle. I went down the sprayer boom and started taking the nozzle. Bodies often had those little screens in them. And they were just plugged solid with white milky content, and that the type of herbicide that we were using for that reason didn’t flow through screens very well. What was happening was you were putting 40 PSI through the boom and with nozzles being restricted and others being open.It was forcing more products through the regular nozzles over allocating some spots, which was stunting the growth of the peas because they’re not rated for that type of herbicide level. And then the other areas we’re getting about nothing and we’d get weeds growing into there and end up being just a wreck. Really unfortunate because we know pressure in fluid will go to the least resistance and the least resistance was some nozzles and some were others. It was a nightmare. There’s no going back either. You can’t wash it off like, oh, we’re good.

Russ: You get one shot. And that’s one of the reasons why we started this research over four years ago. We asked ourselves, why are there chemical resistant weeds and why are there weed escapes when you have $350,000 sprayers with all these new classes of chemicals? But the real truth is these classes of chemicals have gotten so sensitive. Specific with their droplet size and rates that, frankly, Albert Einstein himself couldn’t figure this out. I’ve said that because you’ve got all these different tips and all these different chemicals and all these different combinations. And so that doesn’t surprise me one bit.

Mike: Nick, how long have you been working with the new technology?

Nick: As far as SpraySense goes, we haven’t. But with the block systems on our air drills from Intelligent Ag, we’ve been hearing that we were actually one of the first customers in Montana that purchased the system. At least over 10 years ago it was one of the first systems. Right away we saw the benefit in having a wireless system. Wires are a nightmare when stuff is vibrating and moving around, most guys don’t have the facilities, but they’re drills under a building through the earth, so it gets rained on all year and it’s just you just deal with headaches because the system usually doesn’t work and wireless was just so nice. You just run power to it. It works and it saved us right off the bat. Fertilizer is the biggest thing. It gets clunky, gets clotted, a little bit of moisture and they plug these runs up.

Then as we started getting into our peas, we had one year where we were using our own seed for our peas and we bought a cleaner. We didn’t run them through a scalper. We basically kind of air cleaned them. And we’re like, oh, we’re good and ran through. Well, we didn’t realize it, but over 6000 bushels of peas, there’s about a 5 gallon bucket of rocks and gravel. Because peas are lower to the ground, we literally ended up with five gallon buckets of rocks measuring from you know a centimeter up to an inch and a half in diameter. We started seeing runs are plugged and their Recon monitor is showing red, red, red, red, red. We stopped the air drill and got out and opened it up and there’s just a rock floating inside of the manifold.

With that said, without the blockage system, the system would have seeded all those acres until your tank is empty or you would have seeded and be like that’s weird. I’ve seeded 300 acres and I should be empty by now. But I still got to seed the tank and so you would have a lot of acres that, what do you do, reseed it? But you can’t, you don’t want to double seed it. You just gotta leave it. Let it be the laughingstock of County Road for everyone driving by.

Russ: Absolutely. It’s interesting when he’s talking about monitoring and how important it is. You talk about the new sprayers and they’ll have recirculating booms. Just as a side note on one of our field days, we tried a purposeful plug of a nozzle if you will. We put a little grain of sand in there that simulates it. We went there the next day and turned on the sprayer and in that it was spraying perfectly. That grain of sand had actually moved down that recirculating boom. Two or three nozzles and dropped in, and it was plugged two nozzles down.

So that just tells you how sophisticated. So we’re we’re we’re helping things by, like, recirculating booms and things like this. But then you almost caused another issue or problem that if you can’t monitor it, you have no clue. So you might fix one nozzle one day and literally within 3 minutes, another nozzle clogged or whatever the case may be.

Mike: So when we’re thinking about this you mentioned. That Recon SpraySense™ screen lights up red showing you the block. It’s showing you the problems. You’ve got to go and fix to be most accurate and most efficient, so the SpraySense came out last summer. Have you seen any or heard those kinds of stories from folks who put the system on last year?

Russ: We’ve done over a quarter of a million acres in testing and things like this, but still one on ones with a lot of the farmers I have to do. But I can tell you this, when you look at like as an example drop the size which is very, very instrumental as far as your insecticides and herbicides or and I should say fungus-sides.

When these guys start spraying a lot of times, they say “Hey I’ve got a dialed in with this particular tip at this speed at this pressure”, but all of a sudden, maybe you’re not going 11 miles an hour. You’re only going 10 miles an hour and maybe you’re at 28 PSI instead of 30 PSI and you’ll see in real time that droplet size changes and you need to do one or two things. You need to stop spraying and go back and put on a different tip. Or you need to change what you’re doing out in the field to make that droplet size correct. It’s real time on the fly management and we have over 1200 tips already programmed into the system. We’ll just choose your tip and you can add your own, if it’s some exotic tip. We can manage it for you. And that’s the beautiful thing because who can manage all?  Nick, you tell me. Can you manage all this?

Nick: I can’t but tell me about it. What is that? Jack of all trades? Master? Have none. That’s just it. I like to think about two of the worn out nozzles. Honestly, who really goes and does a volume count for each nozzle on your sprayer every year.There are those out there that do and are detail focused. But we’re in go mode. If we’re getting air drills, we’re getting trucks ready, we’re getting augers ready. We’re getting fertilizer on site. I’m getting this spray trailer all replumbed ’cause it’s winterized. Getting this done, getting out, getting chemicals, and sprayers out, and we’re ready to plant. I don’t wanna be sitting there going to this sprayer and testing everything, Instead it is a really quick change instead of going through the entire thing.

Mike: This technology, it’s incredible. Russ, we’re gonna go to a break. We’ll come back with more conversation, folks stick around. Before we do, where can they go to get more information? If they’re curious about Intelligent Ag, and want to dig into these solutions. What’s the website?

Russ: It’ll be https://intelligentag.com/. And you’ll wanna go to the Recon SpraySense™ section. There will be different products listed and that’s where you can go.